The third student analysis of SL was conducted by PerSecond and he had asked us to meet him at our regular meeting place in front of the fireplace on MIL’s island, but was otherwise very secretive about his presentation. As we were waiting for the other students to turn up we small talked about our avatars’ clothes – a topic that seems quite popular for both gender in-world. While it doesn’t make much sense to discuss the in-world weather, I do think the interest in the avatar appearance stems from a deeper need to figure out and find your way with the new identity.

PerSecond was actually reluctant to change his appearance from the default look, when he first entered SL, because he didn’t want to put emphasis on that part, but as he learned that caring for your avatar’s appearance signals that you care for the world and are willing to make an effort to learn how to master the medium, he changed his mind. PerSecond told us that had recently received a t-shirt with his company logo, which enabled him to identify more with his otherwise estranged avatar, and as we shall see identity was part of the theme for PerSecond’s presentation. We then headed off to what turned out to be PerSecond’s own home on the Innovative Learning Island.  RL PerSecond works at VIA University College that offers a combination of vocational, higher and further education and they’ve had a presence in SL for quite some time, but it wasn’t until PerSecond entered the MIL course and thus was forced to spend time in-world that he became convinced of the teaching and learning potential of virtual worlds. For his presentation PerSecond had prepared an interesting set-up with a video screen on one wall and a slide presenter on another – a challenging set-up if you don’t master the camera:

Like Perlo & Francine, PerSecond also chose to use the Didactic Relation Model (showed above on the slide presenter) as basis for his presentation and analysis, but he also pointed to other relevant models and theoretical foundations and combined it with video clippings from a couple of other worlds most notably Blue Mars and Hipihi. PerSecond’s primary target group would be building construction students, and one of the main reasons as to why he has been hesitant with the use of SL, is the lack of possibility to integrate other 3D modeling apps in SL – something which Blue Mars offers e.g. through support of content creation tools like 3DSMax.

As part of the presentation we also went on a short tour to see part of the construction site that recently won the annual Danish e-learning award. It is one of the rare sites that also make use of relevant audio – as you enter the building you hear a lot of very loud background noise that would be normal at a construction site.

Be careful not to step on any of the dangerous cords on the floor!

Using SL for work place training is obviously what appealed to PerSecond and he also envisioned different types of role play to enhance the professional identity of the students.  There are already different outfits for the avatars to wear near the construction site, so that the students could enact different professional roles, but as another example of role playing PerSecond had prepared a little surprise for us in the shape of a second avatar, Per Memo. Per shifted between the two avatars and we were asked to comment on the presentation on IM with Memo. 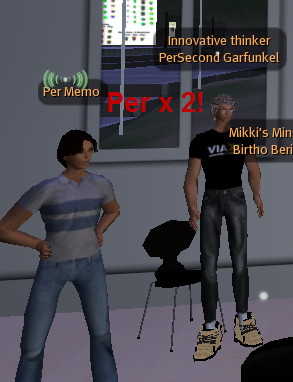 PerSecond pointed to another interesting advantage of using SL as part of this training which had to do with time and flexibility. Here in Denmark it is unfortunately often difficult to find sufficient internships for our students in the vocational sector and SL could provide an excellent supplement and enable the “school part” of the education to be closer to RL practice – something which most students undoubtedly would appreciate. The ability to leave the setting and return at any time convenient for the students also would provide more flexibility.

Given the fact that PerSecond was reluctant to use SL just a few weeks ago, I was quite impressed by his presentation and not least his willingness to explore and try out the many affordances of the medium. Per will continue his work with SL as part of his Master Thesis in the spring where he may be looking into the possibility of using SL as platform for work they are doing at VIA with Chinese collaborators.

One thought on “Case MIL09: Student analysis of SL – part 3”