Lizzie & Jorn, who were in charge of the second didactic analysis in the MIL course, had decided that we should start out by exploring a particular design which then would form the basis for their discussion and reflections, so we went to Teaching 4 – Iowa State University, CELT, where Thursday Xu has created a model of Wenger’s Community of Practice (CoP):

The model has been created as a kind of spiral shaped staircase and as you move up floating text with key concepts central to the theory appears. Other than that there seems to be no apparent interaction possibilities with the model. 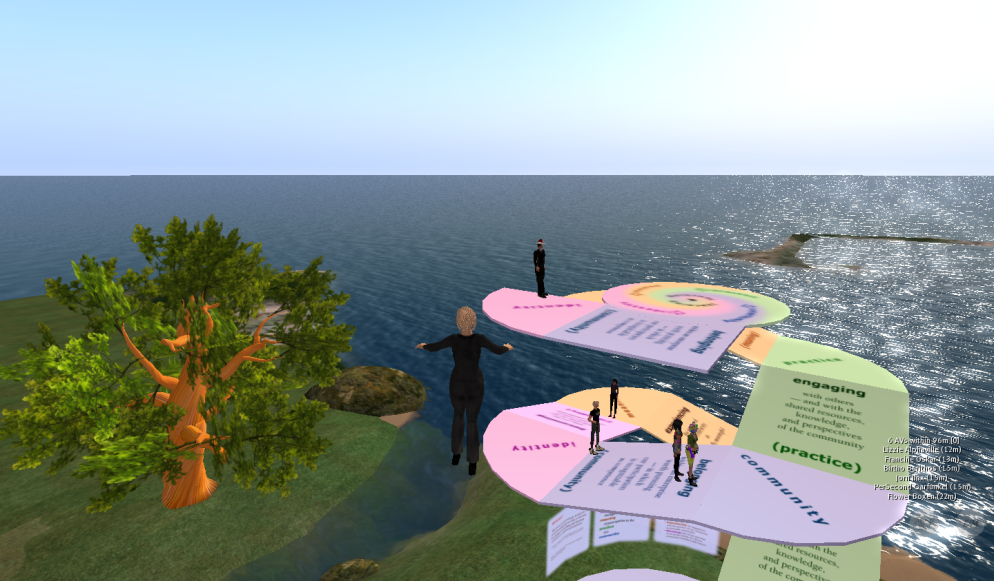 After exploring the model we all went to Media Learning, where Lizzie & Jorn had been able to make use of a presentation setting owned by another (first year) MIL student, Inge Qunhua, who is an experienced and award winning SL teacher. As part of their presentation Lizzie & Jorn started by analyzing the CoP model and I think it is safe to say that none of them or any of the other students was impressed by the model – above all due to the lacking interaction possibilities. My role in these discussions was mainly to listen and observe and it was quite interesting in this case because I did not agree with the students. During the MIL course we have visited other theoretical designs that are based more on interaction between the design and the avatar. Right next to the Cop model, Thursday Xu has created a build of Bloom’s taxonomy, where questions regarding the theory are posed in the local chat as you move your avatar around in the model and we have also been exploring Zotarah Shepherd’s MI build where the avatar can play instruments or solve a mathematical puzzle as examples of the different intelligences and the MIL students clearly preferred these more interactive designs.

In my opinion interaction doesn’t necessarily equal learning. I don’t think my understanding of musical intelligence is enhanced solely because my avatar can be animated to play drums though I recognize that the fun engagement and activity may play an important role in the memorizing process, but there is so much more to learning than just memorizing. In line with Wenger, I believe that negotiation as part of the creation of meaning is essential to the learning process and in this sense my pedagogical foundation obviously is dialogic and I tend to agree with Wegerif. 2006 who finds that one of the goals of education, perhaps even the most important goal, should be dialogue as an end in itself.

Judging the quality of designs for teaching and learning is however very complex and I think that one of the first things you need to clarify is whether the design is intended for single- or multiple-user purposes. In the case of the latter you of course also need to consider the role of other participants and e.g. a facilitator. Lizzie & Jorn found that the CoP model was a “stand-alone” model and therefore they didn’t find it interesting, but as part of their analysis they had also created a suggestion for an alternate CoP model to be used with their particular target group; dental hygienists. This imaginary model was presented as sketches drawn by Lizzie and put emphasis on 3 of the core concepts from the CoP theory;  mutual engagement, shared repertoire and joint enterprise: 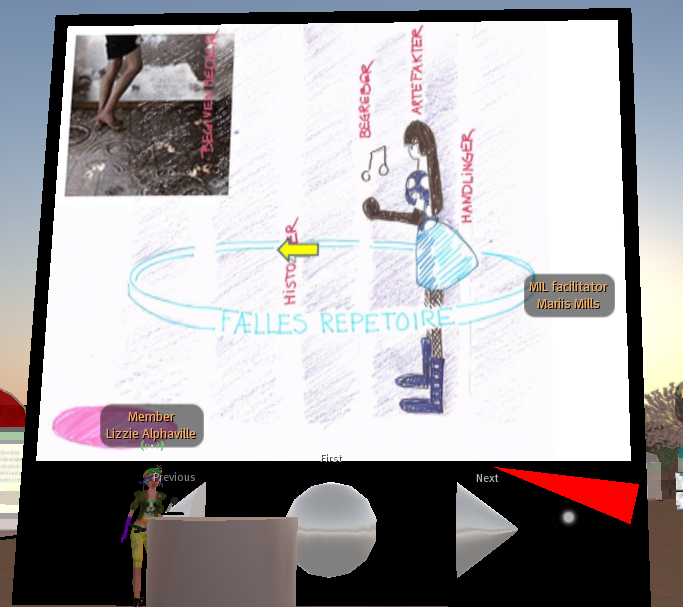 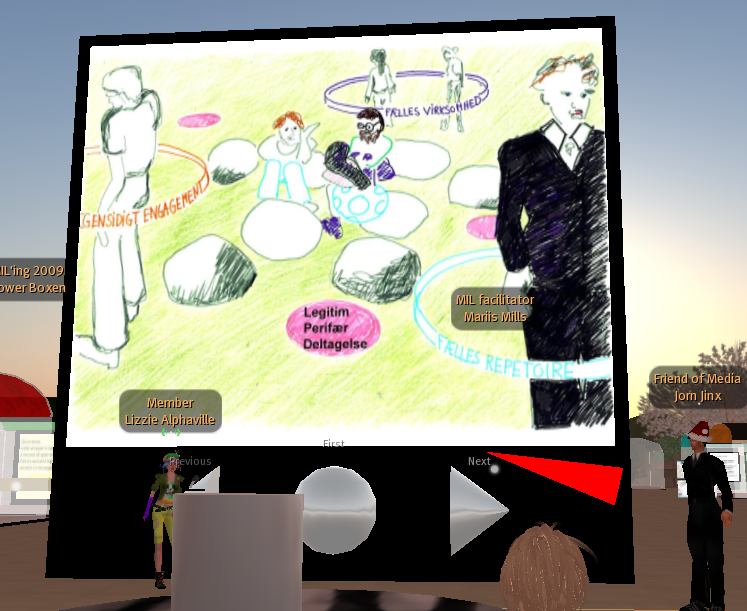 By the end of their presentation Lizzie & Jorn also invited us to join them in trying to place the two CoP models within a third model, namely the model created by former MIL student Carsten Storgaard as I’ve referred to earlier in this post. It turned out to be quite difficult, but started an interesting discussion on models and their usability in general.

Afterwards in their reflections in FirstClass, Lizzie & Jorn, mentioned how difficult it is to teach when you’re unable to see the facial expressions and body language in general – the chat (text/voice) becomes crucial in environments like SL in order to get the sense of not talking to an empty space. One of the things Lizzie & Jorn also criticized about the CoP model was the lack of a place for discussion in the model if you’re in a lager group, but in hindsight they concluded that the need to gather (f2f) in order to discuss is more psychological stemming from our RL habits than practical, since there is no other reason to do so in SL where you always can communicate via group chat regardless of distance. They also felt that their presentation had raised more questions than answers, which for someone who believes in the value of unfinished dialogue was good to hear …

Besides the fact that I was really surprised by all of the students’ lacking recognition of dialogue as main means of learning, I do think Lizzie & Jorn did a great job and we all had a very interesting experience. It is, nonetheless difficult not to mention the irony of the situation; the students really criticized the CoP model and its apparent disability to promote learning, but judging from the discussions and the comments during the session it turned out to be an event with both challenging and meaningful negotiation of several of the topics in the course ;-)