On the 2nd day of the Virtual Worlds Best Practice in Education (vwbpe) I started out by participating in a session by Graham Mills entitled “TBinSL – Thinking Big about the Very Small”. Graham spoke of the use of SL for visualization of especially molecules,  gene data and cells and what was particularly interesting was that he rezzed various objects to support his slides such as the TB genome illustrated below.

Afterwards Graham blogged about his experience mentioning a couple of the challenges a presenter may face. First of all he forgot to lock the slide viewer, which meant that people in the audience could change the slides – for those who have not attended a presentation in-world it may seem rude or strange that the anyone in the audience would do this, but in my experience many SL users spend time running their cursors over objects to see if any are interactive – in spite of this, it was not a problem I was disturbed by during Graham’s presentation.

As I understand it, vwbpe-presenters had been encouraged to use the so-called SpeakEasy-tool by the conference organizers. The SpeakEasy-tool enables the presenter to deliver pre-typed text into local chat, while presenting thus allowing the hearing impaired or anyone else to get the information in the form of text too.  I have not tried out the SpeakEasy-tool, but judging from Graham’s post it adds yet another element to the many issues an in-world presenter needs to be aware of. Graham wisely chose to react instantly to the comments and questions in the local chat during his presentation. This local chat phenomenon is in my point of view one of the major strengths of SL because it has the potential of opening the dialogue between the presenter and the audience. Having run 4 course in-world I do however also know how complex the communication becomes, especially if you have no one to help moderate, and I can fully relate to Graham’s description of the situation.

Note that on the University of Liverpool Island it is possible to check out some of the amazing visualizations Graham and his colleagues have been working on. Graham has also started to explore some of the new features in the SLV2 such as Shared Media and shadow effects, and on his blog,  you’ll find some interesting posts on this.

The next session I attended was a presentation by Kattan Hurnung, who spoke of her experiences with “Design to develop Virtual Wolds”. In this post you’ll find both Kattan’s slides and a recording of her presentation.

Via 5 examples of designing respectively a café, a canteen, a dwelling, an office and an operating theatre Kattan presented a very interesting grid that depicted the relations between information provided if forms of text, images and/or scenarios and the expected learning outcome given by teachers prior to the start of the process of designing these different types of learning spaces. 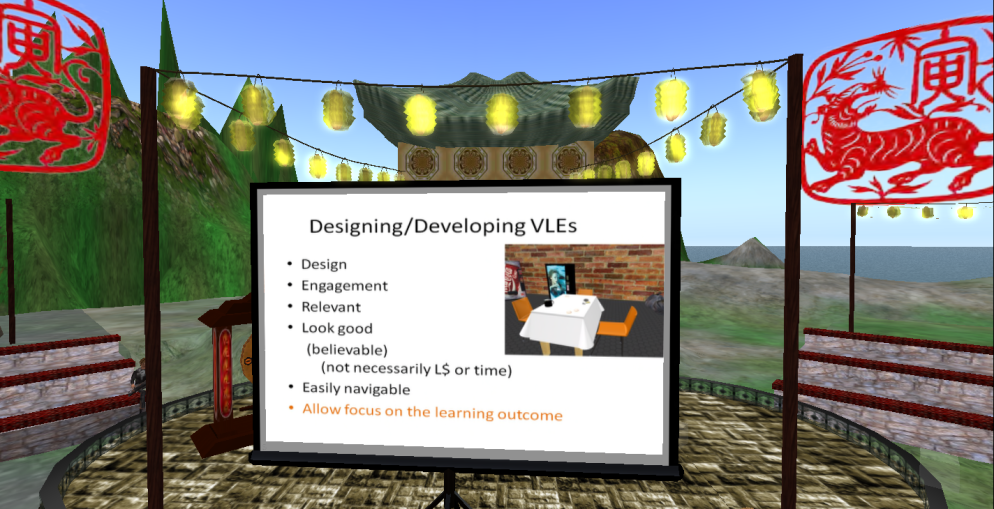 I thought there were many interesting points in Kattan’s presentation and one of the things I took special notice of was her questioning the level of details in designs. Building in-world surely can be very time consuming and perhaps it isn’t necessary to aim for photo-realistic builds – less may suffice as long as the design appears believable.

Next up was a presentation by Kristy Handrick; “Revealing the didactic character of imagery in Second Life.” Unfortunately the technical problems I’d had the day before continued, everything rezzed incredibly slow and I had problems with adjusting the camera, so I gave up and took a break. Kristy also blogged about here experience as an in-world presenter and made an important point on how the SpeakEasy-tool can be helpful to ESL presenters, and since I’m also struggling with the English language, I think I may just try out the tool for my next presentations.

The last session I want to write about in this post was a fascinating conversation between Dusan Writer and Tom Bukowski (author of the book “Coming of Age in Second Life: An Anthropologist explores the Virtually Human”).

My computer still acted out, but the sound was good and I was really glad to participate in this since it raised a lot of questions/comments I need to look further into – here merely presented as points, but for those interested in seeing/hearing the conversation a recording can be found here.

I personally don’t agree that technology is neutral and I was a bit confused when hearing Tom at the end speak of different levels of user-control in different types of virtual worlds (to me the level of user-control indicates foundational ideas forced upon the users by the system developers), but other than that I really found this conversation highly inspirational!

Uh, and another observation I made by watching the recording of the conversation was how boring or non-interactive it appears because we don’t see the backchat on the screen. This was a very interactive event with many, many questions/comments from the audience and that is not the impression you get from just watching the recording. Both Dusan and Tom made several references to the audience, but I think it goes to prove the point that SL is a place and to get the full experience, you really had to have been THERE ;-)

Yesterday my master student, PerSecond and I continued our test of Shared Media in the new SL viewer. When we first tried it out last week, we didn’t have much success, but my ever so helpful landlord, Doctor Asp had some ideas, and so I started off by testing it with him on my holodeck. In Asp’s office – Asp is official Linden Lab SL solution provider and I highly recommend him :-)

Later in the evening I met with PerSecond for our weekly session and asked him to set up a prim in his private home – not in his LL home, where nosy neighbours might disturb (none of us have yet found the time to check out privacy and security settings in our LL homes). We succeeded in setting up both Google docs and EtherPad, writing in them real time (and seeing it without having to reload!), but ended up most satisfied with the EtherPad doc that loaded much quicker on our machines. PerSecond works in Windows, so we get to test both platforms. We continued testing some YouTube videos while trying to figure out what to do about security settings and discussing the most appropriate use in a teaching and learning situation.

Since the docs we tested were completely public our next step was to test security settings to see if in any way we could control access and interaction, and so we went to a sandbox, where both of us had building rights and set up new prims.

Under Customize in the Media Settings it is possible to change control of the prim, and we tried out several settings thinking it would be possible to limit control to our group. In this phase of the testing we needed to bring in our alts; Placebo and Memo, who were not members of our group, and so we logged in and out several times trying out different combinations. 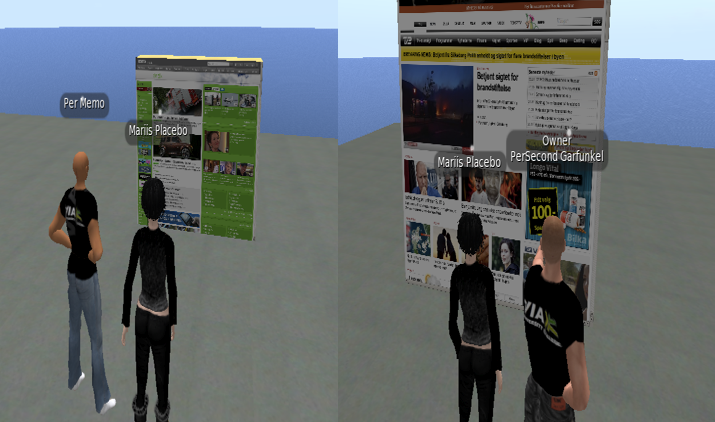 Despite our efforts we did not succeed in limiting control to our group. When the prim was controlled by Owner only, we found that Anyone and Group were restricted to clicking on links (but with automatic reload to the page chosen by Owner), but we had hoped it would be possible to set this for the group, so we’ll continue testing … Now, neither PerSecond nor I are experienced builders, so we may very well be missing out on some obvious points, so if anyone reading this has constructive advice it would be greatly appreciated :-)

This semester I have the pleasure of supervising, PerSecond a Master student from The Master programme on ICT and Learning (MIL). In his Master thesis PerSecond will investigate the possibility of using SL as platform in a Danish-Chinese PBL collaboration he and his colleagues at VIA University College are involved in. PerSecond and I are meeting in-world for our sessions and today I went in to set up for a test of the new Shared Media feature in SLV2.

For unclear reasons* SLV2 really runs slowly on my machine, so for a while there I had to work as a cloud – and let me tell you; that’s a bit distracting!

Anyways, I did mange to set up for a test of google.docs … though I seem to have a recurring “bad-hair-day” ;-)

I’m hoping the problems I experience won’t influence our test later tonight, so that I can get back to our experimentation in a future post …

/Mariis
*) I did read Gwyneth’s excellent post on improving Mac performance, but I can’t force Texture Memory beyond 128, and GL tot stays at 67/192 … so I’m thinking it may be a) a PICNIC error or b) my (still) malfunctioning Mac :-(