As previously described my PhD-project is aimed at improving Blended Learning within Higher and Further Education through remediation and redidactization. Through a process of designing and redesigning two specific Blended Learning courses within 6 research cycles the aspiration is to enhance learner experience and learning outcome by using new augmented/immersive 3D media and a learner centered Problem Based pedagogical approach. In both cases the target group is adult teachers/ trainers from the educational and the private/industrial sector from different countries. Having teachers/trainers as target group has made it quite natural to situate my work within the field of Didactics.

Especially in Northern Europe Didactics refers to a field of research and practice concerned with reflections and actions related to teaching and learning. Historically the field has been teacher-, goal- and/or content-centered, but since the mid 1970’ies we have – at least in Scandinavia – seen an almost paradigmatic shift to a more learning and learner-centered approach.  In Denmark this shift was above all initiated by the establishment of two new universities, in 1972 Roskilde and in 1974 Aalborg (where I work) that were founded in clear opposition to the “Old(fashioned)” universities by using an overall pedagogical approach based on Problem Based Learning and Project Organization in an attempt to amplify student motivation, engagement and learning with higher relevance for the surrounding society.

Within teacher/trainer education Didactic Analysis, as a means to learn how to plan, act, observe and reflect on didactic practices, has been a core component of the curriculum, and especially one model for didactic analysis has gained widespread use, namely the so called “Didactical Relationship Model” by Norwegian education researchers, Hilde Hiim and Else Hippe. Building on the work of fellow countrymen, Bjørndal and Lieberg (whose original model was more teacher-centered), Hiim and Hippe developed the model to show some important relations between different elements in Didactics using a learning theoretical approach. An English description of the model and the use of it in developing an online tutorial for Information Literacy can be found here.

In my PhD-project I currently have data from 4 completed research cycles and I’ve decided to use modified versions of the Hiim & Hippe model as part of my analytical strategy, which will consist of several phases progressing from a general to a more specific focus on didactic elements I find relevant in my particular case. Throughout the different phases I will be using different models, but as I find Hiim & Hippe’s model useful in depicting important relations and elements for general analysis, I’ll start by presenting this model briefly. 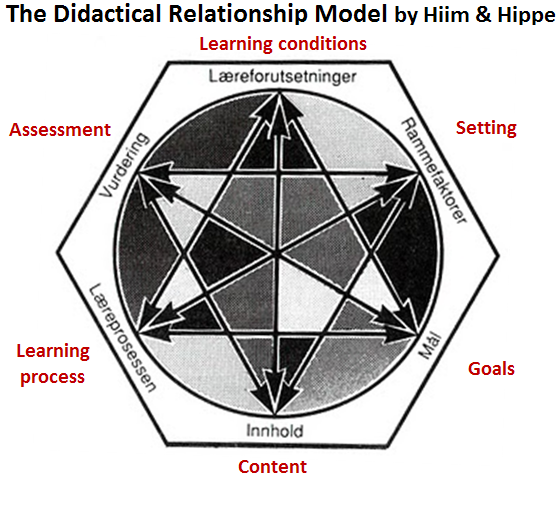 As mentioned above the model shows 6 important elements in a teaching/learning situation, these elements are interrelated and so influence each other in various ways and to various degrees. Even though I find the concept of depicting interrelated elements valuable, I don’t agree on the chosen elements, the description/content of the elements and the semantics in general. In my dissertation I will of course elaborate on this, but for now I will turn to my own revised models.

At the Master Programme in ICT and Learning (MIL), where I conduct most of my teaching and research, my colleagues, Bo Fibiger (1945-2008) and Birgitte Holm Sørensen originally conceived the concept of Didactic Design and combined with the use of Information and Communication Technology (ICT), Sørensen today defines it as: “The process by which the purpose, the goals and the content is determined, and where the planning, the organization and the arena for teaching and learning is shaped based on theories and in relation to ICT-based practice in a context.” I agree on the essence of the definition, but I also see Didactic Design as a result/product and sometime down the line I will also work on revising this definition. For now, the important point is that I consider my work to be part of the emerging field of Didactics combined with ICT and as a consequence my revised model is aimed at Didactic Design as depicted below:

In line with Hiim & Hippe’s model, my model also portrays important didactic elements, but I have chosen to add a few more elements, substitute one and rename some of them. I also prefer to speak of connections instead of relations, while the latter to me implies some sort of personalized bond that I don’t see between all the elements that are interconnected. I suspect that the major reason as to why Hiim & Hippe’s model has gained such popularity has to do with the fact that the elements are quite generic and thus enable the user of the model to define sub-elements depending on own needs and purpose.  One could argue that the elements I’ve added already are part of Hiim & Hippe’s model as sub-elements, but by highlighting them I believe greater emphasis can be obtained. While I do consider the elements in my model to be generic too and that my work with the model will refine the content/sub-elements, I do have some preliminary reflections.

Besides revising the number and to some extend the content of the elements, I’ve also chosen to place the elements within a frame illustrating the point that Didactic Designs within formal education generally function as quite closed systems with very little permeability. Usually the influence from external factors (e.g. political, economical and other societal factors) is much greater than the other way.

In my PhD-project I’ve been working with 2 different cases. The MIL course (3 research cycles) and the COMBLE course (1 research cycle). In the MIL course the majority of the activities have been online, whereas the COMBLE course was 100% online, and I would describe the Didactic Design in both cases as having been ICT-remediated. In Bolter & Grusin’s original concept remediation refers to the process whereby new media refashions older media, but when we start to rely more and more on ICT/new media in our practices, I would argue that not only the media are refashioned, but there is a potential and in many cases a need to also reconsider and most likely revise the other elements in the model. These considerations have led to the next model: 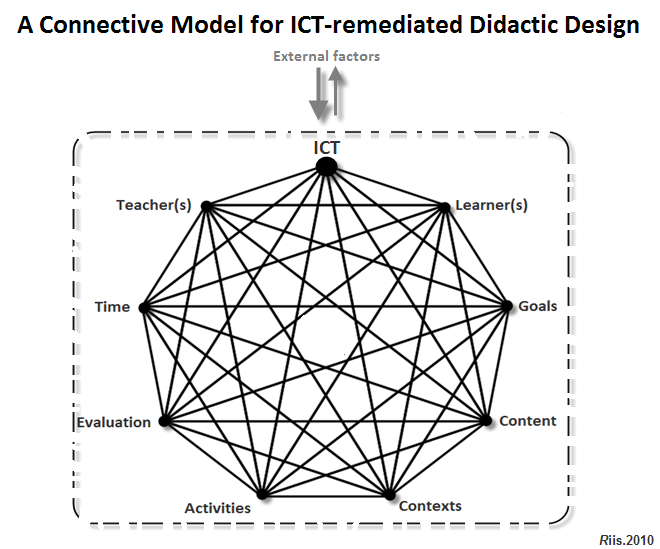 It may come as a surprise that the model doesn’t appear that different, but that’s actually an important point of mine. ICT-remediation constitutes a potential for change, but it doesn’t happen automatically, and changes will depend on the various types of ICT. Walled Garden technology – like conventional LMS’/VLEs – is never pedagogical neutral. Different types of technology have different kinds of affordances and the user’s possibility to change or modify intrinsic ways of communication and content creation is usually very limited. As long as the majority of formal educational institutions choose to rely on conventional technology for remediating their practices, I personally see little prospect of real change. There are, nonetheless, some positive aspects in all of this. Regardless of the rest of the elements in the model ICT-remediation – especially based on Web 2.0 – will force the system to open up and connect more with the outside world and as both learners and teachers become more ICT literate as a consequence of ICT permeating our daily practices, I do expect changes to occur.

At the MIL education ICT is part of the curriculum and even though we also could do with more change, we do try to keep an eye on new media and their teaching and learning potentials. This was also the reason why my PhD-project became concerned with new augmented/immersive media in the shape of the 3D virtual world, Second Life (SL). Based on my experience with remediating existing practice into SL, this kind of medium clearly has the potential of changing the Didactic Design. Without having gone thoroughly through my data, I do see some changes regarding especially teacher(s), learner(s), contexts and activities. These four elements will be foci points in my analysis of SL and are highlighted in the model below: 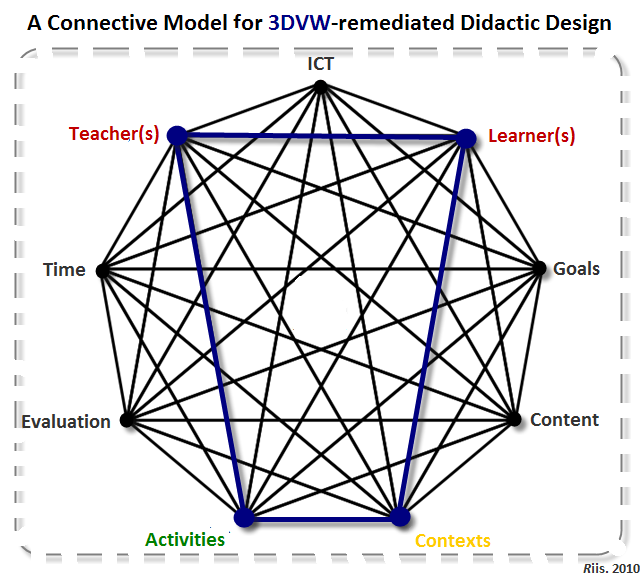 It is quite deliberate that I’ve maintained the ICT element in this version of the model, because the use of SL doesn’t diminish the need to consider ICT in general. Several kinds of 2D technologies are at play in-world, and as I still consider SL to be an emerging, and sometimes very unstable technology, I wouldn’t at this point in time recommend using SL as a stand-alone technology.

These models all focus on traditional didactic elements and I will use them (most likely in revised versions) for my general Didactic Analysis. The last version has a clear connection to another model I’ve developed, which focuses on People (teachers/learners), Places (contexts) and Practices (activities). Based on that PPP-model I’ll be able to focus on topics that are less common in Didactics and in this way I think the models will complement each other profitably.