I’m currently writing about the conventions that I’ve chosen to use in my PhD-project. Essentially, my study investigates the development of a design for teaching and learning remediated in the 3D virtual world, SL. In a Scandinavian or German academic tradition, such a study would be situated within the field of Didactics. However, according to Hamilton (1999) and Schnack (2000), in the Anglo-American mind, the term “didactic” has very negative connotations implying a moralizing and heavily teacher driven approach to teaching and learning. At the Master Programme on ICT and Learning (MIL), where I have conducted my research, we often use a didactic-based terminology (e.g. we often speak about didactic elements, didactic analyses, and didactic design), at least when we communicate in Danish. Despite our terminology, we do not adhere to the Anglo-American perception. Nonetheless, Professor emeritus, Karsten Schnack from the Danish School of Education (Aarhus University) actually recommends Danish scholars to avoid using the term when communicating in English:

In English the term “didactics” is rarely used. The reason probably is that the word has strong associations with the adjective form “didactic”, which is more often used. And for some reason “didactic” has a very negative ring to it. When something is done in a “didactic” way or didactically it is considered to be moralizing and/or heavily teacher driven in a negative way.

Since didactic considerations e.g. in Denmark almost always deals with the contrary, a good advice is to avoid using the words “didactic” and “didactics” in English communication. The risk of misunderstandings is very high.”(Schnack. 2000:2 – my translation)

Because of this language barrier it has become customary for many continental European researchers within the field of teaching and learning to either use the German word “Didaktik” or simply use Anglo/American terms e.g. “instructional design” when describing their activities. Accordingly, and mainly to avoid misunderstandings because I write my dissertation in English, I have decided to use the more neutral concepts of “pedagogy”, and “design for teaching and learning” when speaking about matters concerning the field and the process of designing. While this is not something I deal with in greater details in my PhD, I actually don’t think this is “just a matter of semantics” – there is a distinction that makes a difference. The way we construct, interpret, clarify, and negotiate meaning – even based on similar words – changes over time, but also within and cross cultures.

Turning to the term Didactic, there is absolutely no consensus in the literature regarding the meaning  – not even when looking at the origin – the Greek “didaskein”. Even 2.500 years ago, according to Jank & Meyer (2006), the term didaskein could have several meanings; “to teach”, “to be instructed” and “to learn” and the term didaxis refered to both curriculum (primarily as content) and what was learned (outcome). Even though there has been a tendency towards focusing on the teaching aspect of the term Didactic, many Scandinavian researchers refer to the so-called “Didactic Triangle” when trying to explain the basic components of Didactics. 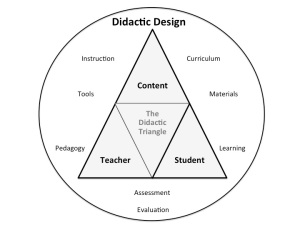 When dealing with teaching and learning, and at the core of any Didactic Design, there’s always a minimum of three basic components to consider: the teacher, the student and the content/subject matter. However, depending on your focus, the triangle can also be used to point to different, more specialized design approaches:

Since I use the term Didactic in a very broad sense, I would consider any of the above mentioned approaches didactic designs as long as they were dealing with teaching and learning in formal, educational contexts. During my PhD research, I have often presented and discussed my work with Anglo-American educators/researchers, and while most seem to understand what I’ve been working on as long as I remember to say “instructional design”, the irony is that to many Scandinavian researchers this label implies “a moralizing and heavily teacher driven approach to teaching and learning.” So I guess in order to understand each other, we need to dig deeper and discuss the finer details of our practices and understandings ;-)

One matter of detail that I’ve often discussed, both with Danish and International colleagues, is the locus of control in the teaching and learning situation. I was recently reminded of a very interesting pedagogical framework developed by Niels Jakob Pasgaard, who blogs at eDidaktik. Pasgaard’s framework is based on a distinction between a monological, a dialogical, and a polyphonic way of teaching. It is derived from the work of M.M. Bakhtin, and Pasgaard uses the Didactic Triangle to illustrate his points: 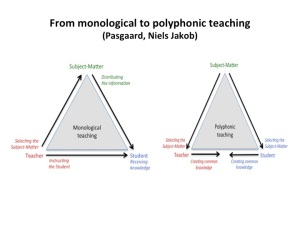 What’s really interesting about this framework is the way it highlights the different approaches to the selection of the content/the subject matter, and the way knowledge is created based on different forms of teaching and learning. Furthermore, the framework can be used to analyse and thus select appropriate tools for teaching and learning – and Pasgaard offers examples of all three types here.

To me, Pasgaard’s framework is an excellent example of how the work of someone coming from a Scandinavian Didactic tradition doesn’t necessarily equal a negative approach to teaching and learning, rather – and as a core principle in Didactics – Pasgaard critically reflects upon our practices and understandings. Just as I have witnessed several Anglo-American “instructional designers” do.