On Monday November 24th the MIL students and I visited Phelan Corrimal at Rockcliffe University. The Rockcliffe University Consortium is a distance learning organization servicing worldwide virtual learners and businesses. Located in Canada, the United States and the metaverse Rockcliffe University Consortium provides education, training and real time collaboration for its virtual members by incorporating interactive 3D immersive learning environments. Rockcliffe also is one of the Metanomics partners hosting part of the community on Mondays. Phelan is the President of Rockcliffe and is a very experienced in-world resident, so it was a great privilege that he took the time to share some of his thought on metaverse-based education and give us a tour to some of the locations on Rockcliffe’s many islands.

We started off in the reception area, unfortunately I had some initial voice-problems, but Phelan and the students seemed to manage just fine without me :-) 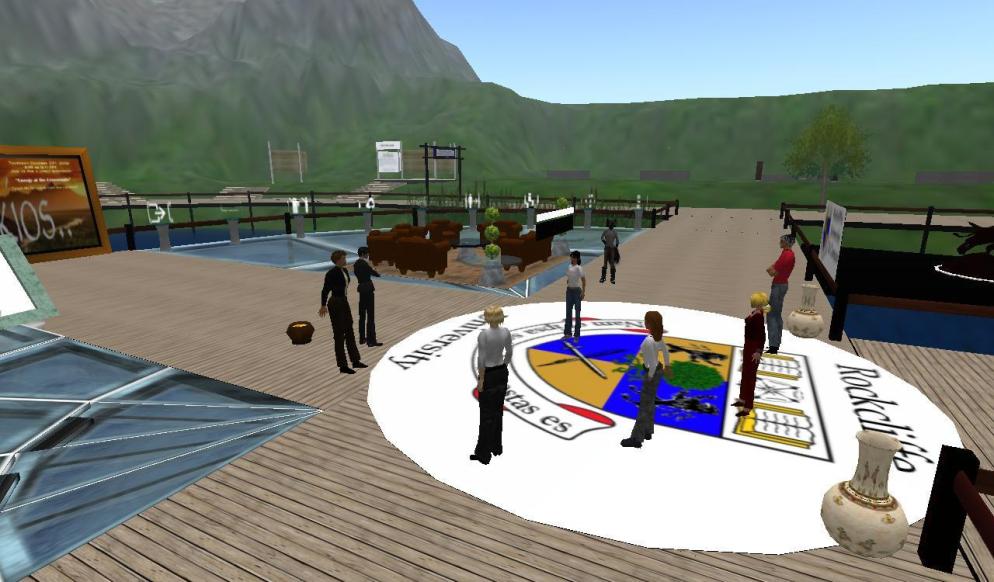 At the Rockcliffe reception listening to Phelan

While we were standing in the reception area an unknown avatar arrived. Usually when an avatar arrives in the middle of a discussion he/she will be greeted in the text-chat, but this was not the case. The students and I discussed this later on, since it was a breach in normal behavior, and we all agreed that the reason why nobody greeted this particular avatar was that he/she had explicit sexual references in his title. All of us are adults, pretty open minded and I don’t think any of us are particularly sensitive, but somehow sexual references just wasn’t appropriate in this context. Interestingly, the avatar representation made it more obvious that we were ignoring somebody and I did feel a bit impolite – a sentiment I don’t think I would have had, if I had just been ignoring a textual message … 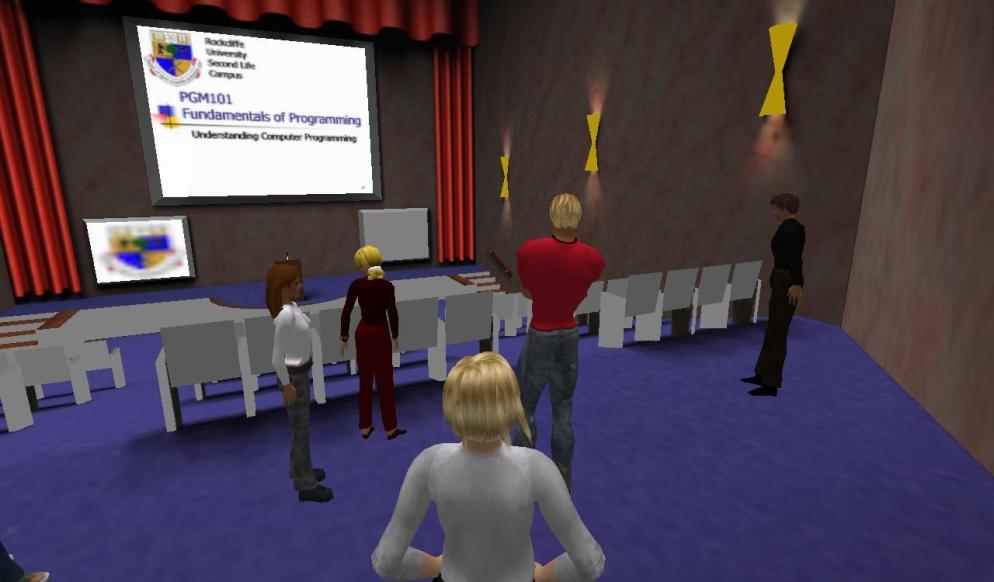 Investigating one of the more traditional classrooms

One of the topics Phelan talked about was how to create sustainable education in the metaverse. Unlike other in-world projects Rockcliffe isn’t funded by organizations or sponsors and developing a sustainable economy is one of the biggest challenges Phelan and his staff are facing. We discussed the possibility of having open classes with the option to buy some sort of certification, diploma or the like afterwards. It’s my impression that Phelan very much would like to employ a temporary kind of open-content’ish principle to their in-world work, but that’s easier said than done! 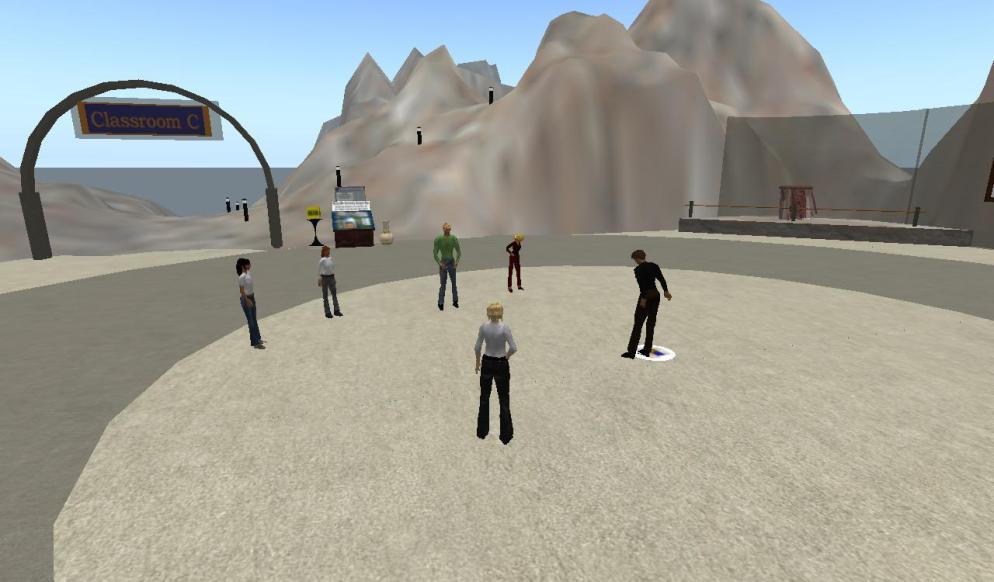 Another type of classroom

Phelan had been attending the E-Learn World Conference in Las Vegas a few days before meeting us, and as he explained his head was filled with lots of inspiration. One of these sources of inspiration was Constance Steinkuehler (though I’m not sure she attended the above mentioned conference), who has done extensive research into MMOs, including learning potentials, cognitive theory and media literacy. Apparently she’s also looking at Second Life and explores the “3rd Places” concept  in that context. As far as I know, the  concept of “3rd Places” was coined by Ray Oldenburg in his book The Great Good Place, and can be used to define places where we gather publicly to facilitate and strengthen local democracy and community. Both references surely need a closer investigation in the future. 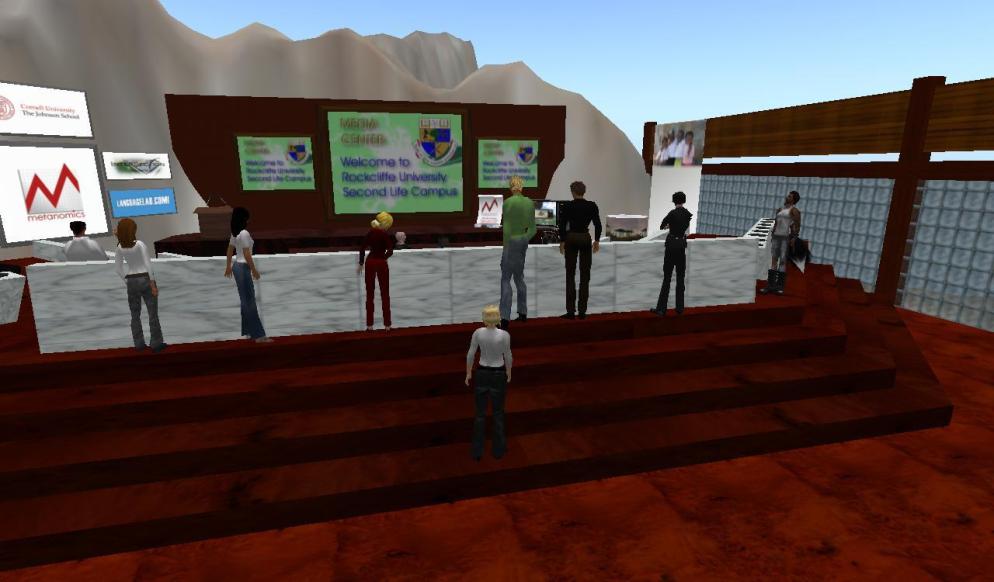 Visiting the Metanomics show from the Rockcliffe partner location

We ended the tour in one of the less traditional classroom settings where Phelan and his staff have experimented with building interactive learning objects – some of them supplemented by both text and voice-over instructions. Some of the courses at Rockcliffe are designed to learn building in-world and this is one of the areas used for that, including a large sandbox. This is also one of the areas that Phelan hopes to find time to expand and further develop in the future.

I had the great pleasure of meeting Phelan RL at The SLCC’08 in Florida in September, and we had some fun and very interesting talks during the convention. Phelan, in my view, truly is of the metaverse visionaries and I’m really grateful that he took the time to meet us. I know the students appreciate these meetings with other avatars/people very much, and with his interest in e-learning and research Phelan was a very relevant and good guy to visit – TY Phelan :-)