Team E and their focus

Team E’s members, Anina & Happytown are both K-12 teachers, and one of the challenges they have experienced in relation to teaching Physics in RL, is that the pupils often find it to be a boring subject matter, and so they wanted to investigate the possibility of using SL to design for fun and engaging activities, leading to the following investigation question:

How can physical activities be remediated in Second Life?

Well knowing that SL doesn’t allow for users below 16, Team E made a point out of explaining how their work should be seen as a pilot test for later exploration in a closed environment in Open Sim.

Team E’s sandbox
Just as the previous four teams, Team E also had a sandbox available from December 9th, 2011, and the pictures below reflect the progression in their work. 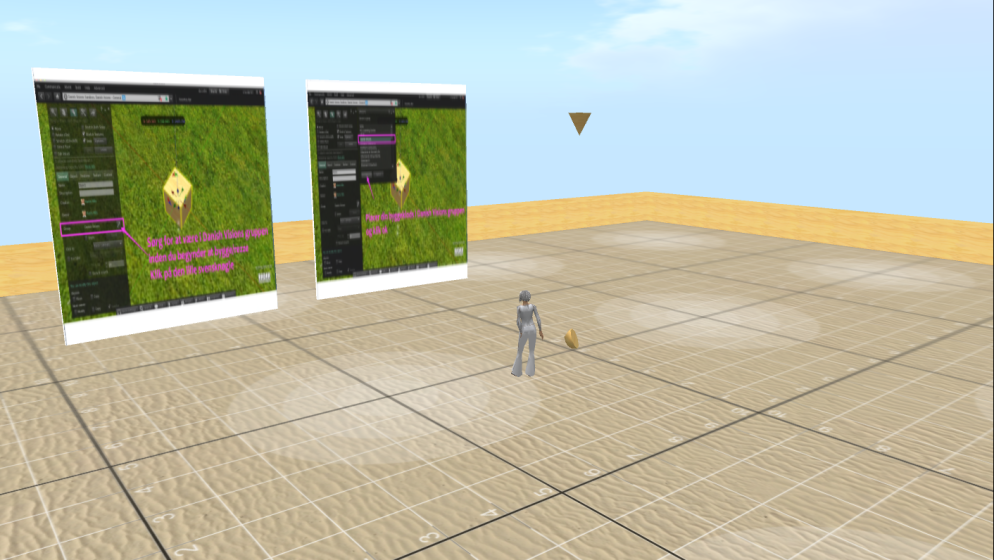 On December 17th, nothing much seemed to be happening in Team E’s sandbox. 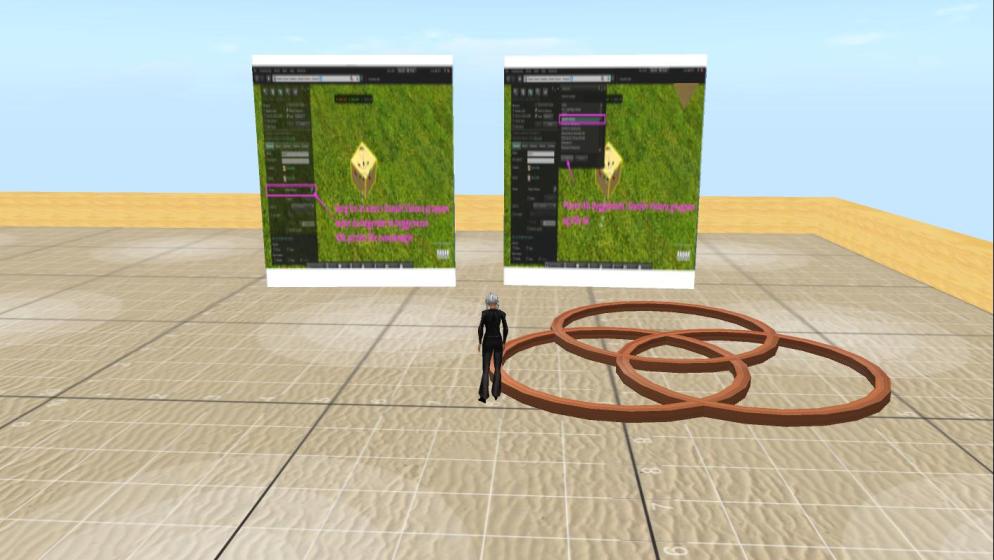 A couple of days later on December 19th this shape – looking like The COI model – appeared.

Just a few days before the Midway presentation Team E’s sandbox still looked quite empty on January 1st, but we were in for a big surprise :-)

During their midway presentation on January 3rd, Team E showed us examples of how physics can be applied in SL.

… and Team E had designed animated sleighs, which their fellow classmates were invited to try out.

And then by January 11th, Team E’s building process had really taken off.

Team E also had a cute angel hovering above their sandbox on January 11th. 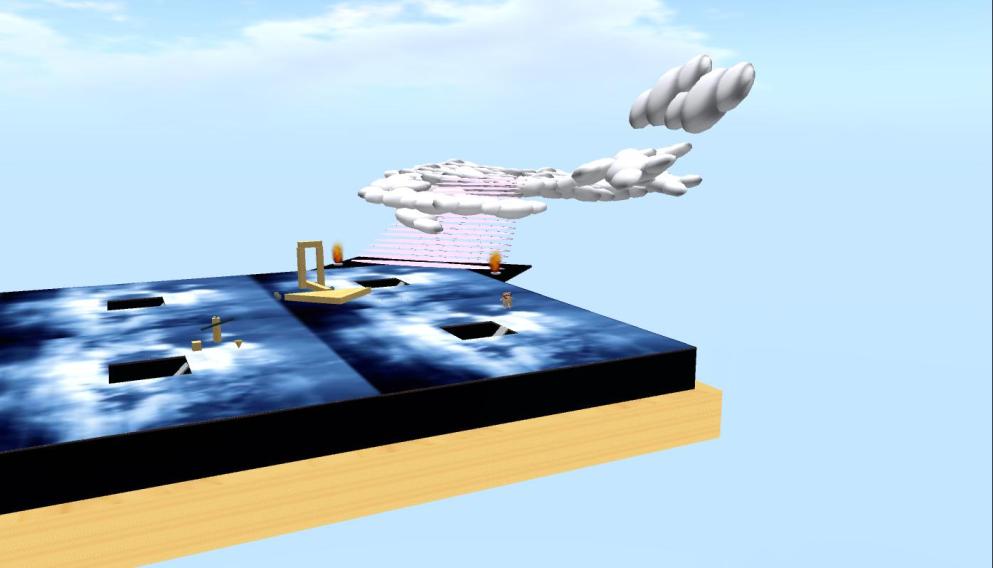 On January 17th, I met briefly with Team E’s Anina to show her how to create a shared media screen. 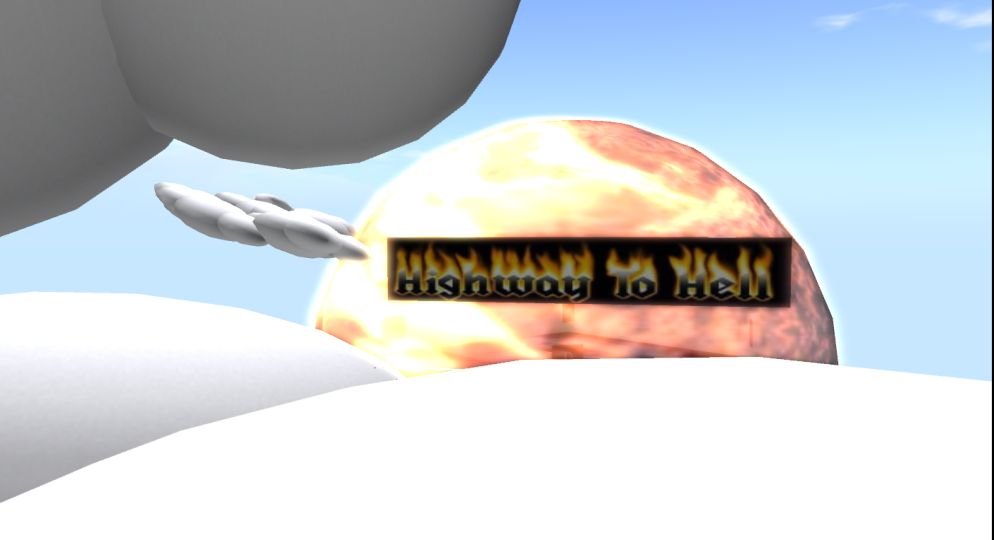 On January, 21st it became very clear that something different was going on in Team E’s sandbox … 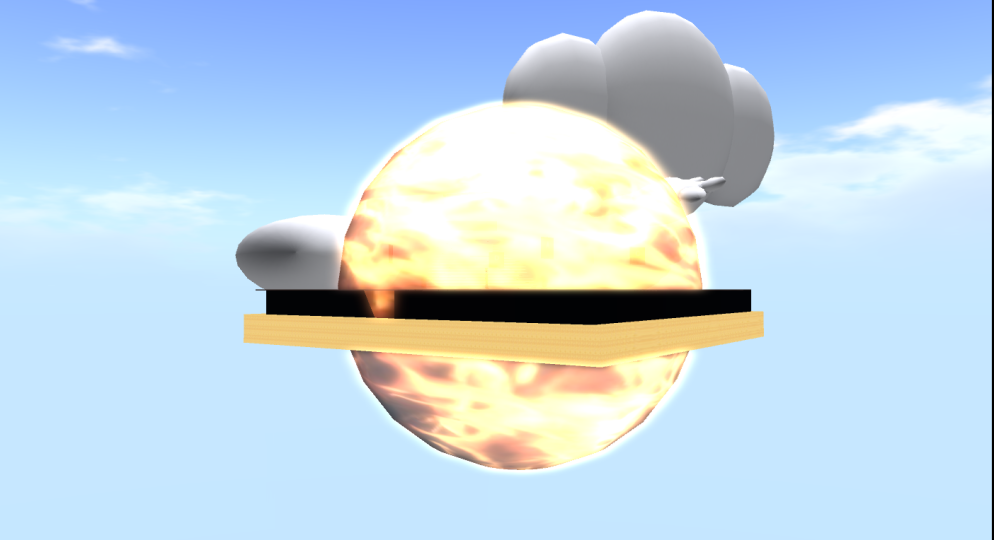 But exactly what, remained to be seen …

Team E’s slide display on one of the clouds.

Team E made extensive use of the shared media feature throughout their presentation, and chose to show their slides on one of the clouds. The tricky issue with shared media is that each user sees the displayed media individually and so the start and stopping point of a video differs. However, Team E had sent out instruction prior to their presentation and after further elaboration in-world, everybody seemed to be on the same “slide”. The team explained how they had wanted to investigate Bolter & Grusin’s concept of remediation and use it to redesign some exercises from an existing instructional design from a Physics class.

The continuum of remediation.

As part of Team E’s design strategy, they had chosen to remediate the activities in the exercises in a respectful manner drawing on RL examples, and then remediate the setting in a more radical manner based on a Heaven-Hell analogy. By drawing on different aspects of the remediation continuum, Team E wanted to design authentic exercises that would stimulate their target group’s learning and engagement due to the more fun and interesting surroundings.

Graphic overview of some key elements in Physics.

After this brief introduction to their design ideas, Team E went on to explain about the exercises that the other teams had to do, and we were asked to follow the “highway” and enter Hell …

On the Highway to Hell … aka to the Physics exercises!

Each team had been assigned their own place in Hell …

With some help from my co-facilitator, Inge Team E had designed four sound-proof rooms, one for each team, that all contained three different exercises. For each exercise, different information was displayed as text or videos, and the teams had to complete at least one exercise, and write the results in shared documents.

Gravity exercise with a ball of lava to calculate mean acceleration.

Results from the exercises had to be written in the shared docs on the walls.

I didn’t manage to visit all teams, but all of them seemed to be fully engaged in the exercises, which was no surprise with the great designs and devilish teachers: and Happytown – their mere appearance made me listen carefully too ;-)

After the exercises, it was time to resurface and go back to Heaven. The Stairway to Heaven.

Back in the clouds, Happytown and Anina returned to their investigation question and elaborated on some of the theories (Wadley, The COI-model) they had used to support their work. Based on Nielsen’s work, Team E spoke of the necessity of the users’ ability to use their imaginative powers to feel immersed in an environment such as SL, and about the need to design for active knowledge construction via in-world artifacts.

The COI model on display.

For the mandatory tour outside the team’s own sandbox, Team E had chosen Oddprofessor’s Museum and Science Center, and we were asked to go there and explore the many fine examples of interactive objects and activities for further inspiration. The place has been created by Oddprofessor Snoodle who uses it to teach Physics/Chemistry for deaf students, and the place is filled with fun and engaging learning activties.

Exploring the many activities in front of the Free Fall Towers. My co-facilitator, Inge volunteered to stand in the line of fire from the canon!

Back in Team E’s sandbox, it was time for reflection and feedback.

Truly a beautiful setting for the final team presentation in the course.

Team E had wanted to show us, how SL can be used for teaching RL Physics, and I think they made a very convincing case. Their ambitious design impressed all of us, and it was a pleasure to witness such a good use of many of the features in SL. Anina & Happytown really have embraced SL, and their enthusiasm shone through their presentation, making many of us wonder what we could have learned, if only we had had the opportunity to learn Physics this way! In summary, Team E provided us with a very fine closure of this course on the educational use/potential of 3D Virtual Worlds :-)

Via SLTalk I just read about Sametime 3D, an ongoing IBM Research and Lotus initiative to integrate enterprise business applications with virtual world applications. This video shows the integration of Lotus Sametime with OpenSim.

According to IBM’s press release the main purpose of this initiative is to “make it easier for widely dispersed businesspeople to interact and collaborate without the time and expense of in-person meetings.” And here is another quote:

The new software overcomes several challenges that have existed for businesses wishing to hold meetings in virtual worlds:

I have to admit that I’m somewhat ambivalent about projects like these, that is projects behind “closed doors”. I think it’s great that companies like IBM research and experiment with virtual worlds and possible mash up’s between 2D and 3D. And I do appreciate the need for especially private companies to operate on their own servers, securing the data etc.  – and this may also be appropriate in certain educational settings. My fear though, is that this sort of “closed door” behavior becomes the prevailing trend. If we all stay in our own little walled gardens, there’s no need to dub them “worlds”…

Of course I’m aware that there are de facto many closed doors in real life too, but I still believe that one of the major affordances of virtual worlds like SL is the inter-cultural openness in all aspects of the word. Where else do I accidently bump in to fascinating, clever and friendly people? Just this week I made two new acquaintances, Benjamin, who turned out to be a Danish US based e-learning consultant and Digi, a Scottish anthropologist with a special interest in freedom of expression :-)

In the MIL course that I ran in the fall ’08 I had planed several visits to both Danish and international colleagues, and I know that the students really appreciated these opportunities to meet, discuss and reflect on professional matters with people from different educational cultures – meetings that would have been impossible to realize outside SL.

I’ve always felt that if 3D virtual worlds were to make a really, really important and innovative contribution to educational technology the secret would lie in the community – the global community feeling in SL is what brings and binds us together. Quoting Lennon; You may say that I’m a dreamer – but I’m not the only one ;-)