On February 1oth Dr. Ralph Schroeder of The Oxford Internet Institute will be giving a talk entitled ” Being There Together: Social Interaction in Virtual Environments” on the CAVE island at 9AM SLT.

The talk is organized by the Applied Research in Virtual Environments for Learning Special Interest Group (ARVEL SIG) as part of their ongoing in-world discussions.

This talk will be of particular interest to me given that different ways of being there together are some of the core concerns in my PhD, and the first book I read in relation to my PhD research was in fact “The Social Life of Avatars” (2002) edited by Dr. Schroeder. Since then I’ve been following Dr. Schroeder’s work, and especially some of the articles he has published in The MIT Journal, “Presence – Teleoperators and Virtual Environments“. In my opinion the different ways of being there together are closely connected to different perspectives of the perception of presence that humans potentially get when interacting with computers (the HCI perspective), and in this regard I think it is possible (at least in an analytical sense) to distinguish between

In so far as you define a “virtual environment” to include the affordance of creation, I would add a sense of doing, which then in turn also could relate to doing together (co-creation), and then could relate to social presence. However, these are my preliminary thoughts, and it is important to stress that there is no consensus in the literature as to neither definition nor use of the terms of presence. When I’m done with the final analysis of my data, I’m hoping to be more articulate on this matter. An interesting challenge here is also that I’m hoping to connect Wenger’s (1998) 4 components of learning (practice, community, identity, and meaning) to the different aspects of presence, and this will be tested in my analysis. Regardless of this outcome, I find it important to emphasize that when dealing with virtual environments such as 3D virtual worlds doing together becomes just as – if not more – important as being together. And I have a strong feeling (not very academic yet, I know ;-) that becoming together may be even more important … anyways, these are some of the issues I’m currently struggling with in my PhD-work.

As I understand it, Dr. Schroeder will focus on results from his latest 2011 book (with the same title as the talk) “Being There Together. Social Interaction in Shared Virtual Environments“, which I haven’t read yet. Nonetheless, Dr. Schroeder’s slides for the talk have already been put up for viewing on the island, and judging from these, the talk will include some of the ideas Schroeder expressed in a 2007 paper entitled “Virtual Environments and Other Media for Being There Together: Towards a Convergence of Technologies, Uses, and Research Agendas.” In this paper Schroeder compares “virtual environments” (VEs) with three other technologies: 1) videoconferencing, 2) online spaces for socializing and gaming, and 3) online awareness and social networking technologies. One of the things that puzzle me about this is the way Schroeder defines “virtual environments”:

VEs are defined as providing the sensory experience of being in a place other than the you are physically in, and being able to interact with that place [1, 2] A shorthand is to say that these are technologies for ‘being there’, and multi-user VEs for ‘being there together’ [3]. (Schroeder. 2007: 1 – see original for references)

And in the video below Dr. Schroeder repeats at least the first part of this definition of VEs :

It is in fact not so much the definition that puzzles me, but rather the way Dr. Schroeder uses it to differentiate between VEs and other media. In the 2007 paper Schroeder summarizes his comparison of the four technologies in this table below: 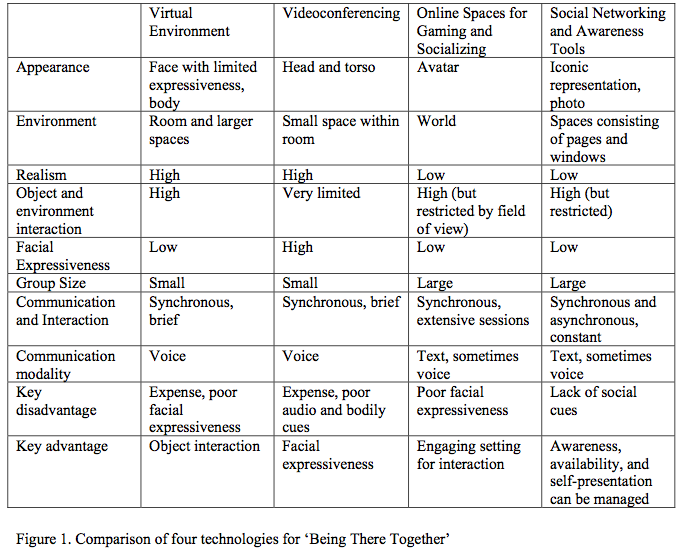 When looking at this table actually a couple of things puzzle me. First of all, I’m wondering what kinds of technologies Schroeder would label as VEs? In the above mentioned 2002 book Schroeder links VR and VE tech closely, and that could perhaps explain the “face with limited expressiveness, and body” in the Appearance cell, but I’m honestly not sure … Secondly, when I look through my SL-avatar-based glasses, I guess a medium like SL would best fit in the column of “Online spaces for gaming and socializing”, but again I’m not sure. However, if this is where Schroeder would place SL it brings forward new questions/comments. As a general comment I would say that SL fits the definition of a VE in that it also gives the user the experience of being in another place, being able to interact in this place, and of being there with others. Schroeder does in fact point to an increasing overlap between different technologies, and so I wondering why he doesn’t reserve VE as an overarching concept or definition. In more specific terms related to SL I would comment on some of the claims in the column;

I’m fully aware that a general comparison can’t and shouldn’t capture more system specific nuances, and Schroeder recognizes that this comparison may “be drawn too sharply – in reality many of them overlap” (2007:2). Even so, I’m really looking forward to meeting Dr. Schroeder in-world later this week, and I’m hoping that I get the chance to ask him to elaborate on some of these issues – and meanwhile I’m impatiently waiting for his new book to arrive :-)

Schroeder, R. (2007) Virtual Environments and Other Media for Being There Together: Towards a Convergence of Technologies, Uses, and Research Agendas. Proceedings of Presence 2007, Barcelona, Spain, October 2007.

One thought on “Different aspects of Being There Together”