Monday October 13th I attended a RL seminar at Roskilde University arranged by the Danish research project Sense-making strategies and user-driven innovations in virtual worlds: A critical analysis of virtual market dynamics, cultural and social innovation and knowledge construction. Focus was on design for learning in virtual worlds – especially in SL. Here are some of my personal highlights … 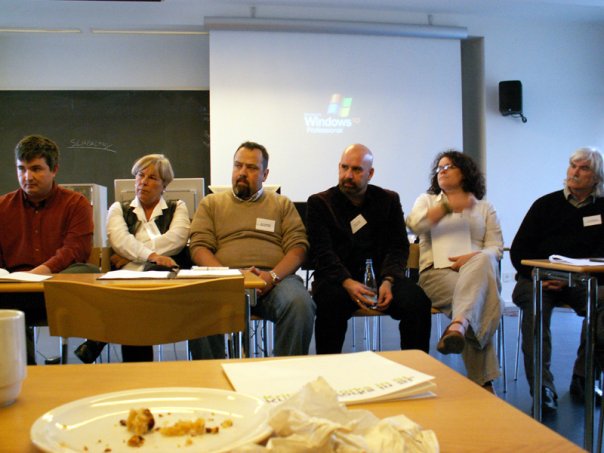 Sisse Siggaard Jensen gave a short presentation of the research project, and what I find most interesting is that the project will be empirically driven and based on collaboration between universities, institutions and private companies, hereby providing an opportunity for researches and practitioners to benefit from each other. Read more about the project here. I’m not part of the research project, but do collaborate with several of the people involved, and since the research on virtual worlds still is rather limited in Denmark, I think it’s pertinent that we join forces – so many thanks to the team for making this event public :-)

John Lester opened with a keynote on SL. Before joining Linden Lab in 2005, Lester worked with creating online communities for both patients and medical staff at the Department of Neurology at Massachusetts General Hospital and at Harvard Medical School. Lester’s background within Neurology gives him a really interesting take on learning, which in his term is bound by biology. As far as I understand Lester, this means that we as humans used to navigate real life actually may find many strengths and advantages in 3D virtual worlds as a sort of default predisposition. Some of the characteristics of humans such as recognizing patterns, navigating in 3D, communicating with other people, creating communities and using tools do seem very applicable or transferable (not without problems though ;-) From a learning theoretical point of view this really is interesting, and I would love to hear Lester talk more specifically on this!

A keyword for Lester when talking about SL was sharing – SL is all about shared experience, and shared places. Elaborating on this, Lester identified several examples of shared places based on different modes of reality:

Returning to biology Lester pointed out that our brains appriciate or even demand places and faces, that we crave emotional bandwidth, and that education in SL therefore should be seen at the intersection between people and places reminding us that there are humans behind most avatars.

I’ve had the pleasure of meeting Lester twice now, and I have to say that he really incorporates the SL community feel – no wonder he is such a popular Linden :-)

Next up was Denise Doyle from University of Wolverhampton. Doyle has been involved in The Immersed in Learning Project since the beginning in 2007. Creating the Kriti Island has been part of this project in order to have a place for collaboration both nationally and internationally. Kriti Island has also hosted a very successful artist lead project on Reality Jam – an interactive exhibition contemplating creative practices. Doyle has a special research interest in interactive narratives and is using SL as a place for experimenting with different theoretical concepts and as a teaching and learning tool in undergraduate programmes in Digital Media.

Jeremy Hunsinger, from the Centre for Digital Discurses and Culture, Virginia Polytechnic Institute and State University, whom you may know from the weekly SLEd Lessons in Second Life, did a talk on Interaction and Interactivity in SL pinpointing the many boring, non interactive builds in-world and addressing some of the technical problems students may encounter when entering SL. Hunsinger reminded us what a dreadful experience SL can be if it is cluttered by technical problems and if you only explore the world on your own. I agree that SL is best experienced together with others. SL is about collaboration and community first and foremost. So many places in SL are still just pointless replica of RL with no interactivity other that clicking on notecards or being redirected to out-of-world websites. I do feel that realistic rebuild can be appropriate, but respectful remediation just shouldn’t be the prevailing principle for in-world learning design – where is the innovation in that?

With his avatar rezzed back in 2005 Terry Beaubois certainly is one of the more experienced and persistent residents, and it was really illuminating to learn more about Beaubois’ work and research. As Director of Creative Research Lab (CRLab), Montana State University Beaubois has a vision of bringing together academic staff and students from different disciplines both RL and in-world. Being a RL professor of Architecture Beaubois intuitively started out by creating a spectacular place for his students in-world, when it suddenly dawned on him that he actually was depriving them of perhaps some of the most valuable lessons in doing so, and so he tore down the build and let the students do the work. Sharing control and responsibility with his students seemed to be an important part of Beaubois’ pedagogical philosophy and I really enjoyed meeting a teacher who focused so much on the students and their needs. In some projects Beaubois and colleague Larry Johnson have brought together students from disciplines such as art, architecture, and film, and he proudly showed us this little film created as a result of this collaboration:

Final speaker of the day was Kim Holmberg from the Department of Information Studies at Åbo Akademi in Finland. Holmberg is an expert in social media and Library 2.0 and was the first university lecturer to use SL in education. Holmberg reported from a study he did together with colleague Isto Huvila, where they used SL as an alternative learning platform in distance education. Holmberg and Huvila found that SL cannot replace face-to-face, but as an alternative platform SL proved to be more “fun”, and they wish to study this particular aspect further. Holmberg was very interested in the avatar phenomena and how this kind of representation influences the learning processes. Holmberg also focused on the fact that we persist (especially as newbies) on bringing RL behavior into SL even though it doesn’t make much sense – e.g. when we sit down or face the one speaking. In this aspect, I think Holmberg’s talk supplemented Lester’s initial ideas of biological and cultural predispositions very well.

Summarizing the many interesting talks and discussions isn’t easy, but I was personally confirmed in some of my own findings and I was reminded of the complexity of design for learning (in general!).
SL – as a 3D learning platform – has a huge potential, but there still are many critical aspects to consider. The entrance and beginning phase as a newbie in SL can be filled with technical problems that need to be addressed both in- and out-world. Offering a possibility for humans, represented as avatars, to meet synchronously across time zones and geographical place, SL gives us a unique chance to explore communication, interaction, embodiment and many other natural and cultural phenomena. So far, in my personal opinion, much educational design in SL does not take advantage of the new possibilities to design learning environments NpIRL, but I do think this is only natural. When entering a new environment we bring our cultural and biological predispositions/experiences primarily in order to survive, to find “common ground” both literally and figuratively speaking. Only when the new environment has become habitual, I think we’ll be able to cross the intersections between the many modes and possibilities of reality. Since research in learning in virtual worlds like SL is still in its infancy, I’m quite confident that the future will bring exciting, mind-blowing examples of design for learning in 3D – and the great speakers clearly showed us how to continue this endeavor …

2 thoughts on “Designing for Learning in SL – RL seminar”